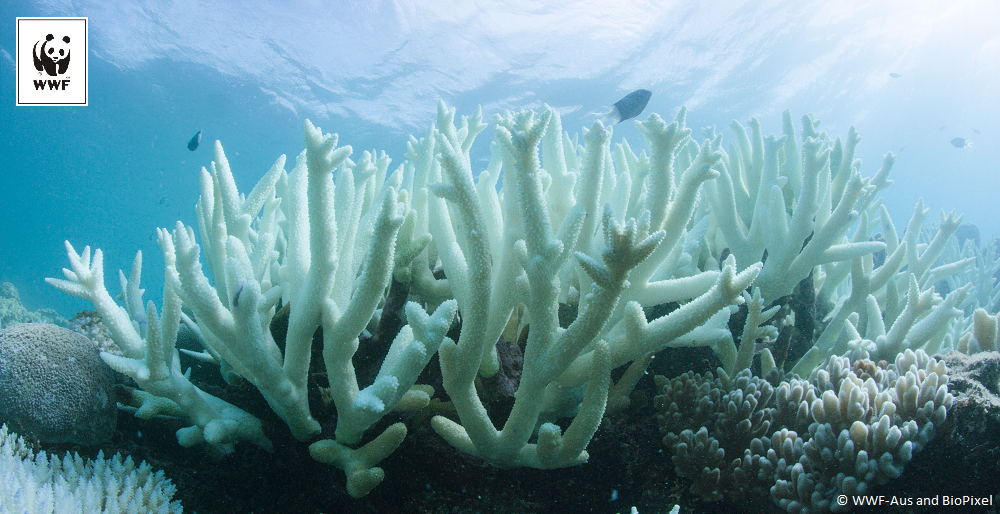 The Great Barrier Reef has now been hit by four mass bleaching events: 1998, 2002, 2016, and 2017. Last year’s event was the worst on record, killing an estimated 22 per cent of all coral, with damage most severe in the remote far north.This time, well known tourism locations, further to the south, from Port Douglas down to Townsville are being impacted. The situation is still evolving but coral mortality could potentially be even higher than last year.

John Tanzer, Oceans Practice Leader, WWF International said, “What is unfolding before our very eyes is the starkest evidence that climate change is already wreaking havoc on the ocean. Coral reefs are a beloved natural wonder but less appreciated is that they also directly support the jobs, livelihoods and food supplies of many millions of people.

What will happen to these people as large areas of coral die? Mass coral mortality is fast becoming a humanitarian and economic concern, and will soon be elevated to a crisis if reefs die alongside densely-populated coastlines and islands. This issue is moving onto the core agenda for many leaders around the world, particularly those whose people’s lives depend on healthy reefs. The solutions are clear: we need a major lift in action to bring down carbon emissions and scaled-up effort to reduce the local pressures on reefs so they have maximum chance of withstanding the onslaught of climate change.”

WWF-Australia Head of Oceans, Richard Leck, said, “Scientists warned that without sufficient emissions reductions we could expect annual mass bleaching of the Great Barrier Reef by 2050. Consecutive bleaching events have arrived 30 years early.” Mr Leck said the unprecedented bleaching must serve to drive more urgent efforts to tackle climate change in Australia and globally. “We must address the climate crisis– fuelled by the burning of fossil fuels – that is driving coral bleaching.” The video and still pictures released by WWF were shot by Emmy award winning cinematographer Richard Fitzpatrick from Biopixel. They were filmed on Monday 6 March and feature Vlasoff Cay off Cairns where Mr Fitzpatrick filmed many sequences for David Attenborough’s Great Barrier Reef series.

“Vlasoff Cay used to have the best coral diversity in the area. Now with the water sitting at 32 degrees all the way to the bottom, the corals are dying. Many are already dead and covered in algae,” Mr Fitzpatrick said. “The Reef is facing an imminent danger of mortality at a level that far exceeds last year over a greater geographical distance. “Our fossil-fuelled politicians are polluters of time which we don’t have when it comes to the Reef,” Mr Fitzpatrick said.